Several folk dancing groups active at the province Friesland. The different groups have each their own costumes. These costumes wear characteristics from the region where the groups are founded and finds their origin around 1860. The Eastergoa Skotsers distinguish themselves by the choice for the Frisian costume such as that was worn in the period 1820 - 1840.

All costumes are hand made and existence from purely natural substances such as cotton and silk.

Costume for the woman

Within the Eastergoa Skotsers there is a large mixture to costumes for women. Because the choice for a period of 20 years, it is visible that also in that period the clothing was vary fashionable. But moreover the costumes also preserve certain traditions in this period of the Frisian costume. This meant that there were a lot of variaties in the costumes.

The costume for the woman has been built from several components. Women wear underwear, a skirt and so-called `jak’ (top part which reaches the hips). Also the women wear an apron for the waistline and `shawl’ around the shoulders. Entirely to finish the women wear an ear iron with flapping bonnet and possibly some jewelry.

The most obvious difference in the costume for the woman is find in the sleeves of the ‘jak’ (top part). These differences are shown on the photograph

Not visible for the witnesses is the ‘lijfgoed’ (underclothing). This exists from white cotton pair of underpants until below the knee and a white petticoat. Both parts have been finished off with lace and are provided with bands, so it is possible to knot them at the waistline.

Extraordinary of the Frisian costume is the head ornament for the woman. This exists from several components. A white bonnet is placed on tied up hair. The edge of this bonnet has been finished off with knitted cotton. Above this, a black bonnet and an ear iron is placed. The ear iron such as that is worn by the Eastergoa Skotsers is made of silver and has two versions: narrow and broad.

At last, on the bonnet and ear iron, the women wear a white flapping bonnet. This smoothly falling bonnet has been made of tulle with an border of lace and the length can vary. This flapping bonnet is fixed with special long silver bonnetpins.

The women can wear several jewels, frequently a bracelet and a neck collar. These are possible of gold, grenade, red coral or jet is. The shawl the women wear is pinned with silver or golden shawl pin. On the apron can hang a silver clamp case (silk or dam kiln) pinned on a silver collar and hook. Moreover a ‘chatelaine’ are frequently worn. 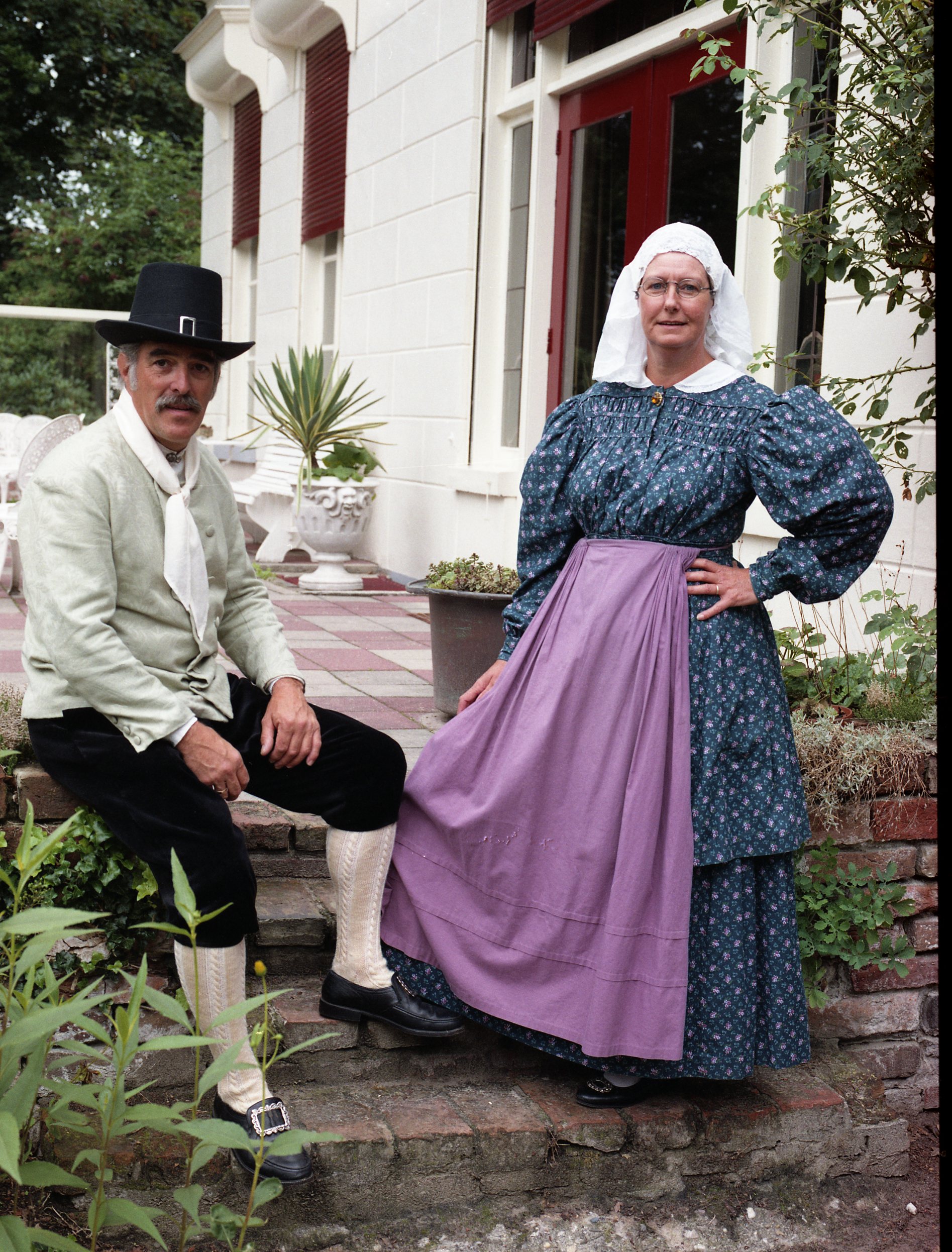 Costume for the man

The costume for the man has been built from several components. They wear a `baitsje’ (jacket), made of cotton dam kiln. This `baitsje’ is provided with buttons, which can be made of the same substance, but also of leg, tin or silver. Under the `baitsje’ the men wear a linen shirt, with a embroidered collar and cuffs. The opening of the collar and cuffs are closed with silver buttons.

Trousers which the men wear is so-called `flinging down trousers’. These have been made of black velvet and have fling down to the front, provided with buttons. Trousers reaches the knee and is closed there with silver loop.

The men wear knitted woollen hosiery until the knees. The shoes are black leather and are provided with silver loop.

On the head the men wear a black cap, that is known as `biedermeier’. Also this cap is provided with a silver loop.

Finally, the most of men wear a silver pocket watch, pinned to a collar with signets.